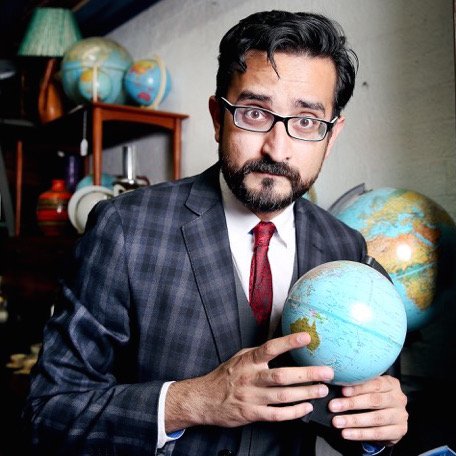 Sami Shah is a multi-award winning writer, comedian and former co-host of Breakfast on ABC Radio Melbourne.  He’s been profiled in the New York Times, ABC’s The Australian Story, BBC Radio 4, NPR, and has appeared on QI with Stephen Fry and The Project.

Sami has been performing award-winning and highly acclaimed comedy for over a decade and used his acerbic wit to address world affairs and social issues, in comedy clubs and even international platforms like TEDx.

His autobiography, I, Migrant (Allen & Unwin) has been nominated for both New South Wales and Western Australia’a Premier’s Literary Awards and the Russell Prize for Humour Writing. His first novel Fire Boy (Fantastica) was released in 2016 and is now available in South Asia as The Boy of Fire and Earth (Picador). His latest non-fiction book The Islamic Republic of Australia (Harper Collins) was released in June, 2017.

Sami has written columns for national and international newspapers and magazines, short stories for anthologies, comedy and documentaries for radio and has recently hosted Shut Up, a five part series on free speech for ABC Radio National.

Stay up to date with Sami Shah on Twitter.

Sami Shah was fantastic! He was well received by the students and staff who provided very positive feedback. Sami’s address was well targeted and inspiring. Sami Shah is definitely a keynote that we hope to have along again for future events.

—A. Terry, Diversity Programs Officer, Faculty of Arts, The University of Melbourne March 2018

The event was fantastic, we had really positive feedback from the audience, students involved and their teachers. Everyone was buzzing afterwards. The dynamic between Jacinta and Sami made a world of difference for this year’s iteration of the event. They kept the event rolling so smoothly and made the students feel comfortable with the unique situation.