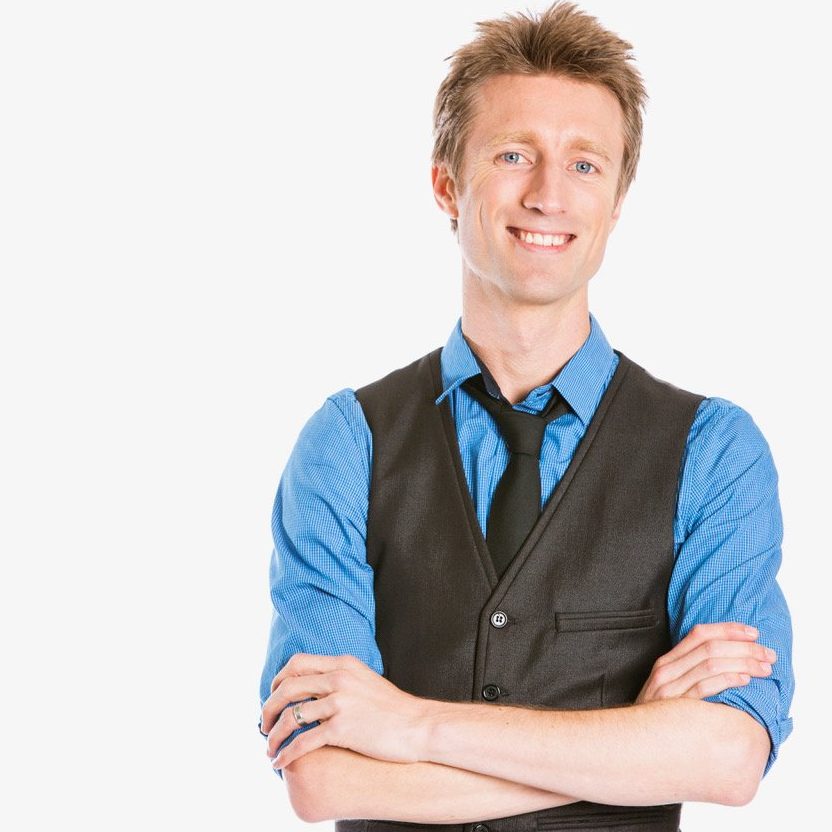 Sammy J is an award-winning comedian, author and musician. A proud nerd, he abandoned his law degree to travel the world and sing funny songs for a living. You may have seen him on TV, at a festival, or as one half of the man/puppet duo Sammy J & Randy.

As a solo act, Sammy J won the Best Newcomer award at the Melbourne International Comedy Festival. He has since performed in Edinburgh, Montreal, and every major Australian comedy festival. His album “Skinny Man, Modern World” received an ARIA nomination for Best Comedy Release, and he gained a national following with his satirical take on the 2016 Federal Election, “Sammy J’s Playground Politics”. His recent solo show, “Hero Complex”, won Best Comedy at the Melbourne Fringe Festival and was nominated for a Helpmann Award in 2017.

Collaborating with Heath McIvor, “Sammy J & Randy” received the Barry Award for Most Outstanding Show at the 2010 Melbourne Comedy Festival. Their acclaimed live shows have taken them from the Sydney Opera House to London’s West End, and in 2015 they were handpicked by Neil Patrick Harris to appear in his Montreal Gala. Their musical sitcom, “Sammy J & Randy in Ricketts Lane”, premiered on ABC TV in 2015 before launching in the USA & Netflix UK, and was nominated for three AACTA awards. As a composer, Sammy J has written countless comedy songs for stage and screen, and scored the incidental music for “Ricketts Lane” and “Sammy J’s Playground Politics”.

Away from the comedy world, Sammy J’s MC skills have seen him host award shows, interview politicians, and inject much-needed humour into corporate events. He regularly runs workshops in schools, and his debut middle-grade novel, “The Long Class Goodnight”, was released in 2018.

Sammy J is a proud Ambassador for Big Brothers Big Sisters and Oxfam and has travelled to South Africa and PNG to witness their work firsthand.

Sammy J’s biggest project remains unfinished. In 2008, he started “The 50 Year Show” a comedy spectacular that will run every five years until 2058. The show continued in Melbourne in 2018.

In 2019, Sammy brings his hit ABC TV characters to the stage in his new show ‘Sammy J’s Major Party.’ Currently, Sammy’s satirical sketches can be seen every Thursday night on the ABC.

Sammy is able to confidently take on a brief and deliver it exceptionally with humour, charm and enthusiasm. His manner is warm, engaging and funny and each time our audiences have thoroughly enjoyed Sammy’s performance. Sammy is an outstanding talent with an ability to perform as an MC, comedian, musician or storyteller.

Sammy J is an absolute pleasure to work with. He has a truly wonderful sense of humour and is a consummate professional. He is so popular with our audience and team, that we have booked him for a third year in a row. His ability to roll with whatever happens on the night means the event runs seamlessly, making our job so much easier, and our event a success every time. Sammy J is one MC we love to work with.

What a performer and all round entertainer! Sammy J’s unique and individualised song for our graduating ceremony was the highlight for all involved. I can’t think of another performer who could have pulled it off the way Sammy did.

Sammy J was great. He was easy to work with, he connected well with the residents and they all loved him! We will definitely be booking him again next year!